Why Tesla Wants MBAs—Despite What Elon Musk Might Say

Tesla, Inc. founder Elon Musk, a graduate of the Wharton School at the University of Pennsylvania, once pessimistically said, “As much as possible, avoid hiring MBAs. MBA programs don’t teach people how to create companies … our position is that we hire someone in spite of an MBA, not because of one.”

While Musk’s take on MBA hires may seem intense, rigid, and even a little mean, Tesla—a world leader in the design, manufacture, and sale of solar technology, energy storage systems, and electric vehicles—is still a sought-after landing spot for many recent business school graduates. And, ultimately, if you’re the right type of MBA candidate, Tesla will be happy to hire you, no matter what the company’s founder may think.

What You Need to Know About Tesla

Tesla, Inc. was founded in 2003 by a group of engineers who believed that electric vehicles could be better, quicker, and more fun to drive than their gas-powered counterparts. More broadly, Tesla is steadfast in its belief that the sooner the world stops relying on fossil fuels and moves toward a zero-emission future, the better.

Tesla’s corporate offices are based in California, and its vehicles are produced at its local Fremont factory. According to the company, as Tesla continues to expand its product line, its production plan is also set to increase to 500,000 luxury vehicles a year by 2018.

In addition to its vehicles, which have come to include more affordable makes in addition to luxury models in recent years, Tesla has also designed entire lines of energy solutions, including the Powerwall, Powerpack, and Solar Roof. These products and systems have enabled homeowners, businesses, and utilities to manage renewable energy generation, storage, and consumption more easily and efficiently than ever.

Tesla has also built the Gigafactory in Nevada to significantly reduce battery cell costs. The company projects that it will produce more lithium-ion batteries in 2018 than were produced worldwide in 2013. The facility allows Tesla to manufacture batteries at the volumes required to meet production goals and create thousands of new jobs.

Arial view of the new Tesla Gigafactory in Sparks, Nevada.

PayScale, which details salary expectations for various companies based on degrees, industries, years of work experience, and more, indicates that MBAs can expect an average payday between $90,000 and $130,00. Salaries can vary depending on specialty. 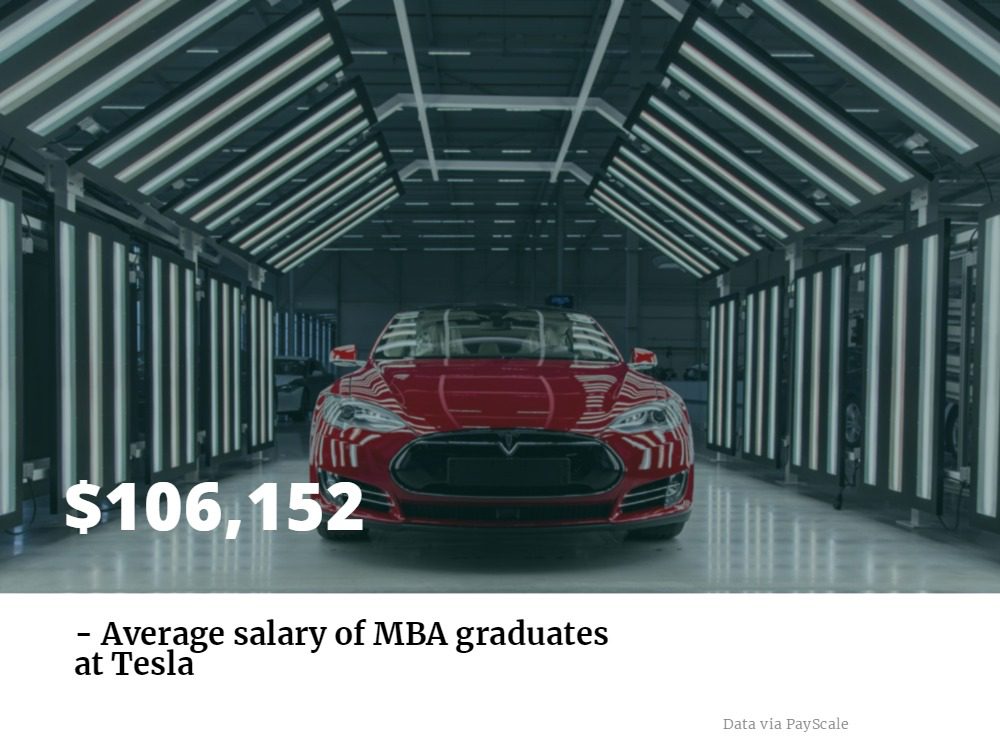 Who Is Tesla Looking to Hire?

While headquartered in California, Tesla’s workforce spans four continents—North America, Europe, Asia, and Australia. The company is committed to hiring and developing top talent from around the world for any given discipline, while building an inclusive environment in which all people can work. To fill its technical roles, Tesla prefers candidates with backgrounds in fields such as automotive engineering, computer engineering, computer science, manufacturing, and robotics. Meanwhile, its preferred backgrounds for non-technical roles include, but are not limited to, accounting, finance, human resources, marketing, and sales.

Finding Your Way into a Tesla Post-MBA Career

One of the best ways for MBA students to start a career at Tesla is through the company’s internship and co-op program. Tesla hires year round and offers flexible three-, six-, eight-, and 12-month work terms based on hiring needs. Basic eligibility requirements to apply for an internship/co-op are simple: You must be a current student in good academic standing enrolled in a relevant program and actively working toward your undergraduate or advanced degree. But make no mistake, this is a serious internship. At Tesla, students are expected to perform at the same caliber of excellence as any other employee.

Interns and co-ops work on a variety of projects important to Tesla’s mission and goals. Students are matched with teams and projects that best fit their area of interest and experience. According to Tesla, assignments are based on the company’s current hiring needs but often include critical path projects and hands-on involvement. And, again based hiring needs as well as students’ proven performance, the company often brings many interns and co-ops back into full-time roles.

One example of an MBA internship opportunity at Tesla is the MBA Program Management Internship. This paid internship immerses students into one of Tesla’s operations teams. MBA interns are placed in program teams across Business Operations according to their background and interests, including:

Interested students should complete an online application and will be contacted if there is interest in their candidacy. Unsurprisingly, Tesla receives a very high volume of applications, so getting into the groundbreaking company is tough, but not impossible.