The newest Economist best MBA rankings for full-time programs is officially out, with two Chicago schools topping the list.

You can see from the list above, that the top five ranking has stayed very consistent from last year. However, once you move past Stanford’s fifth place ranking, things change quite a bit. No top school saw a bigger rise than the University of Navarra IESE Business School. The Barcelona institution moves up 11 spots in 2018—the biggest rise in the top 20.

Spain’s IESE Business School saw the biggest climb of the world’s elite full-time MBA programs. It rose up from 17th overall in 2017 to 6th overall this year.

The other big mover among the top 10 schools was Michigan Ross, with its five-place ascent. UCLA Anderson, UVA Darden, and Columbia Business School all witnessed marginal shifts of +/- one or two places. UC Berkeley’s Haas School of Business and Dartmouth’s Tuck School of Business experienced the largest year-over-year drops, each falling four spots and right out of the top 10. Haas this year is 11th, with Tuck right behind at 12th. 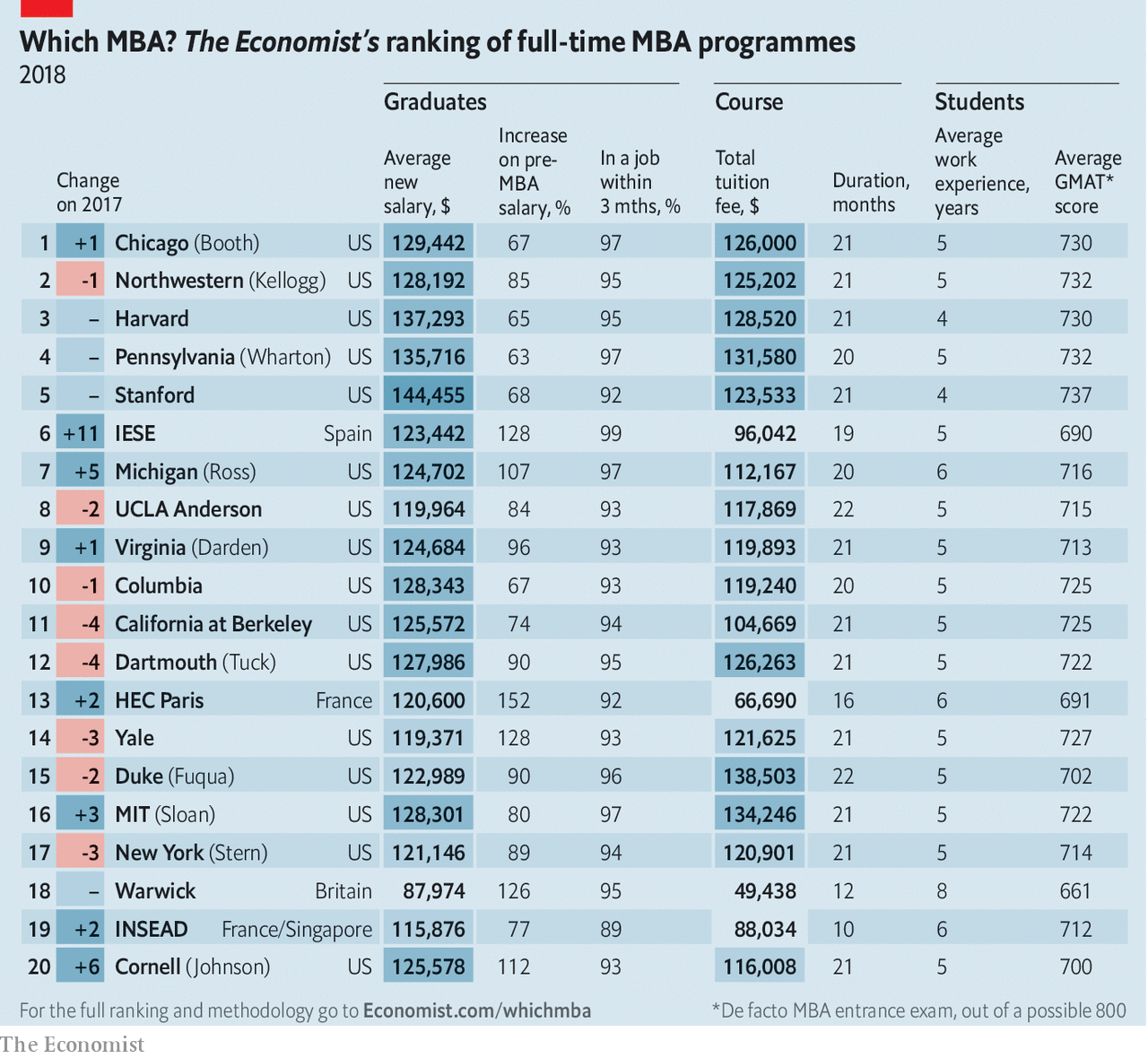 With the new ranking, The Economist explains is ranking methodology in detail:

“The rankings weight data according to what students tell us is important. The figures are a mixture of hard numbers and subjective marks given by students and alumni in four categories: opening new career opportunities (35 percent), personal development and educational experience (35 percent), better pay (20 percent) and networking potential (10 percent).”

The London-based publication also acknowledges, per the data provided, that U.S. schools are getting a bit more expensive. Meanwhile, its European counterparts are becoming more affordable.

“Fees at prestigious American schools in the top 20 now average $123,000, and have risen quickly in recent years. By contrast, European schools are cheaper because courses are generally shorter, so the return on investment is quicker. At iese, at the University of Navarra, which has the top-ranked programme outside America, students pay $96,000 for its 19-month course. The Spanish school has moved up 11 places to sixth, mainly because of a big boost in the average salary for its graduates to $123,000 and a job-placement rate of 99%. Those looking for a bargain should head to Warwick Business School in Britain. A one-year course costs just $49,400, thanks in part to the depreciation of the pound.”

This post has been republished in its entirely from its original source, metromba.com.