Post-MBA careers in tech are a very popular option for MBA graduates, whether they choose to join a large company like Google, Amazon, or Microsoft, or jump into a role with a small venture-backed tech start-up. In fact, tech, along with consulting and financial services, are three of the most popular industries for Class of 2021 MBA graduates.

Class of 2021 Post-MBA Career Placement in the Technology Industry 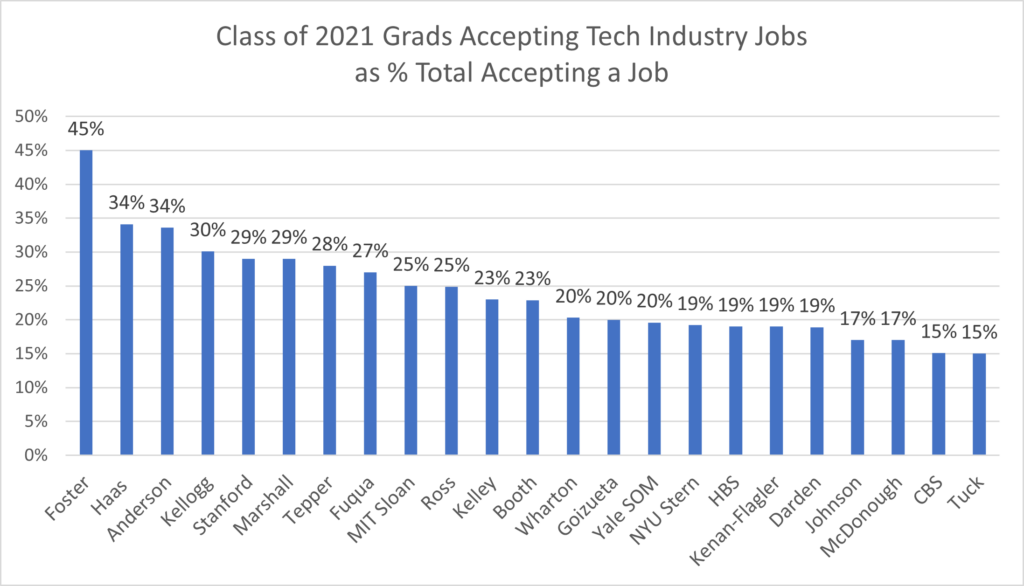 Jobs in the technology industry are clearly quite popular with Class of 2021 MBA graduates. Foster (45%) sends the highest percentage into technology industry jobs, followed by Haas and Anderson at 34% each. Kellogg (30%) is next, followed by Stanford GSB (29%), Marshall (29%), Tepper (28%) and Fuqua (27%). MIT Sloan and Ross are next at 25% each. Of the six schools with the highest percentage of tech industry jobs, five are located on the West Coast. This should come as no surprise given the concentration of big tech firms and venture-backed starts-ups on the West Coast. It is also interesting to see that Kellogg, Tepper and Fuqua have a higher percentage of Class of 2021 grads going into tech industry jobs than MIT Sloan does. The business schools sending fewer than 20% of Class of 2021 grads into tech industry jobs are all East Coast business schools such as Stern (19%), HBS (19%), Kenan Flagler (19%), Darden (19%), Johnson (17%), McDonough (17%), CBS (15%) and Tuck (15%). 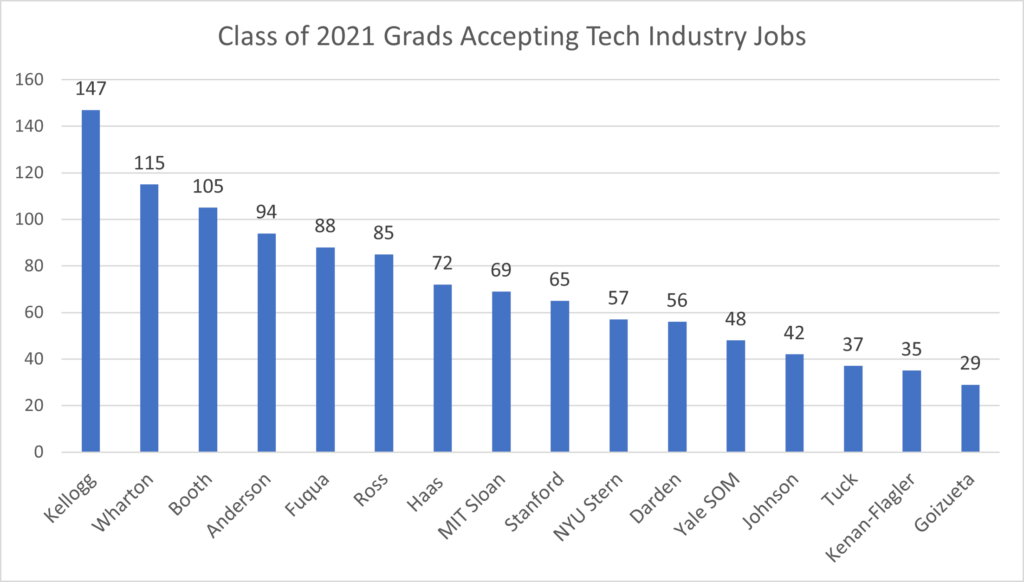 Among MBA students and MBA applicants seeking a tech industry career post-MBA, there is a lot of interest in working at leading ‘Big Tech’ firms such as Amazon, Google, Microsoft, Apple, and Facebook. Thus, prospective students often follow the Big Tech job placement track records for the different MBA programs. Unfortunately, not all MBA programs provide data on job placement at specific tech companies in their published MBA employment reports. Here is a summary of the tech industry job data that is published:

While we don’t have a complete set of published data, we have enough to note some trends. Let’s look at the Class of 2021 job placement trends at Big Tech firms separately for the six business schools that share this data.

Note that these large tech firms hire MBAs to fill a variety of positions including product management and logistics roles as well as more traditional corporate roles in strategy, finance or marketing. 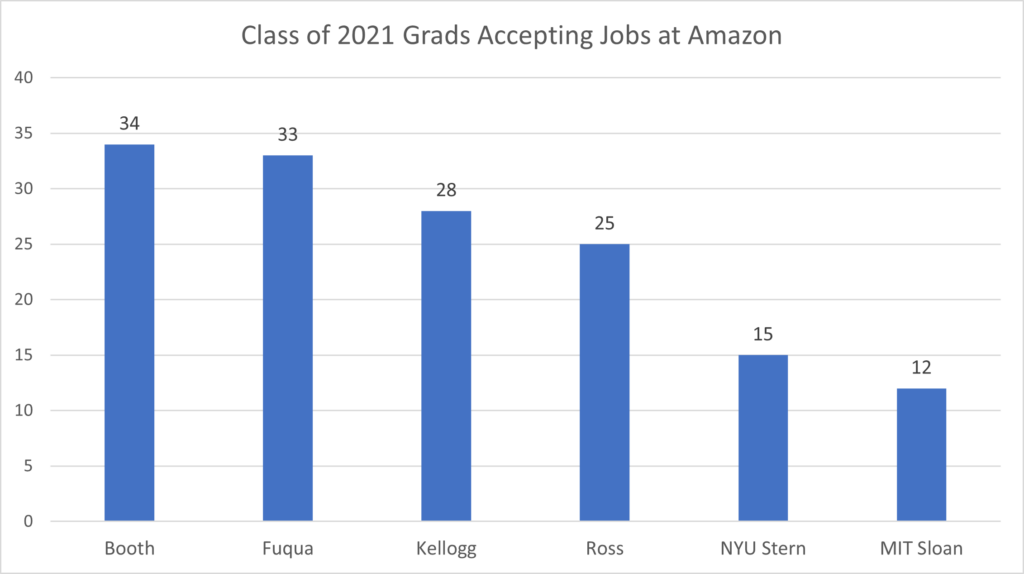 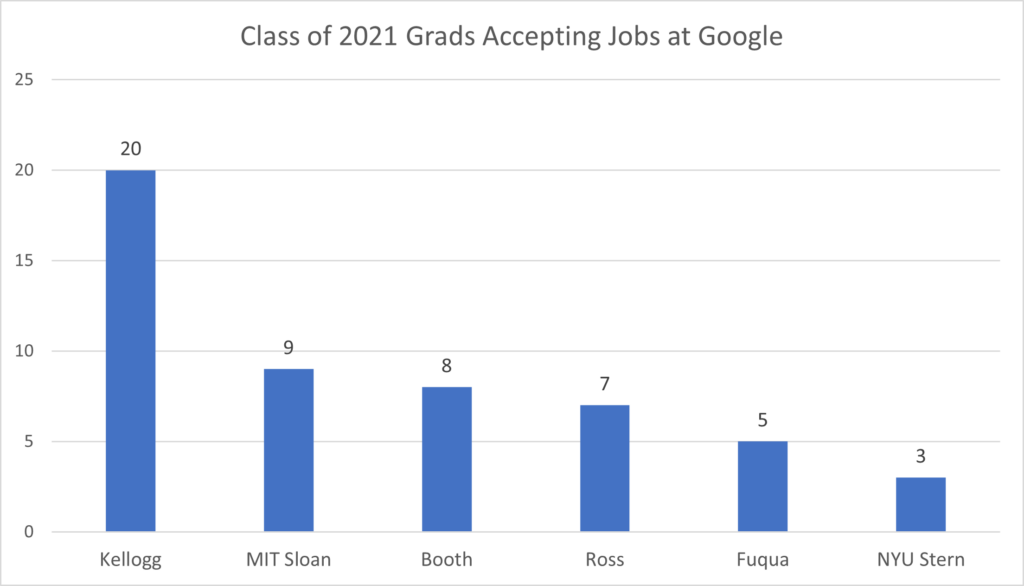 Of these six MBA programs, Google hires the most from Kellogg (20), which is more than double the number that Google hires from each of MIT Sloan (9), Booth (8), and Ross (7). 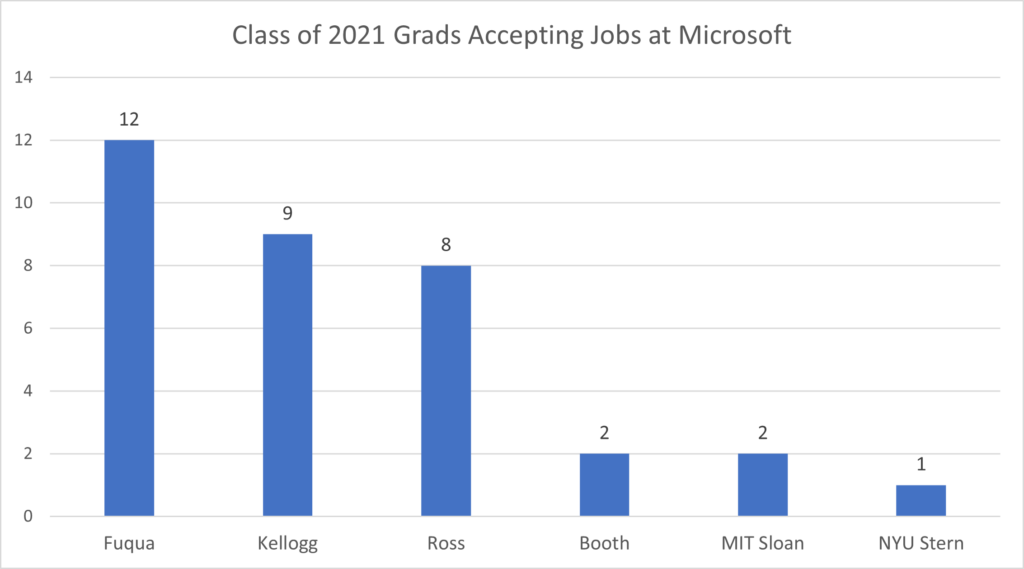 Of these six MBA programs, Fuqua (12), Kellogg (9) and Ross (8) sent the most Class of 2021 graduates to work at Microsoft. Note that these job numbers include jobs accepted at LinkedIn, a Microsoft subsidiary. 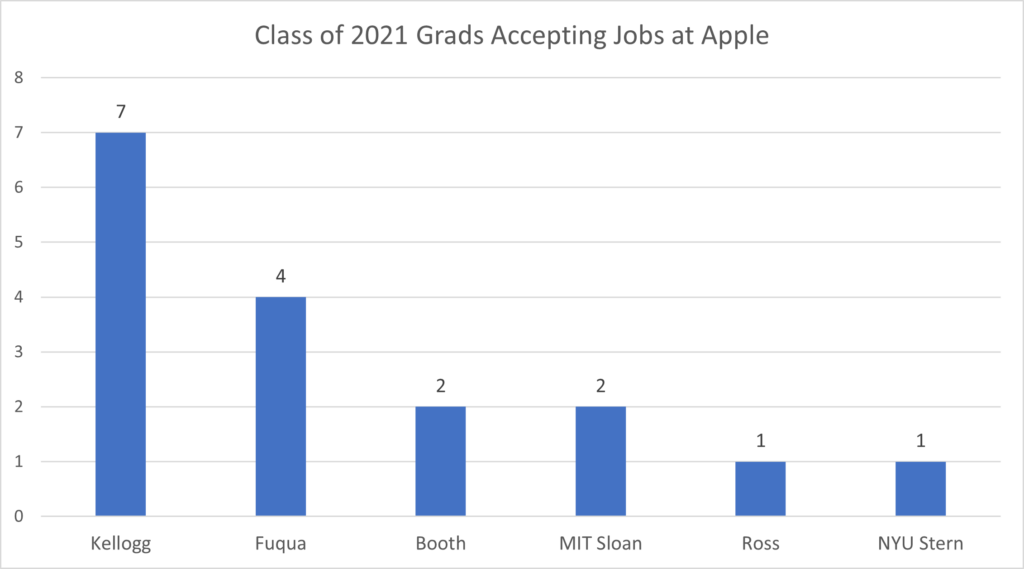 Of these six MBA programs, Kellogg (7) sent the most Class of 2021 graduates to work at Apple, followed by Fuqua (4). Note that Apple CEO Tim Cook is a graduate of Fuqua, which might help explain Fuqua’s relatively strong job placement at Apple. 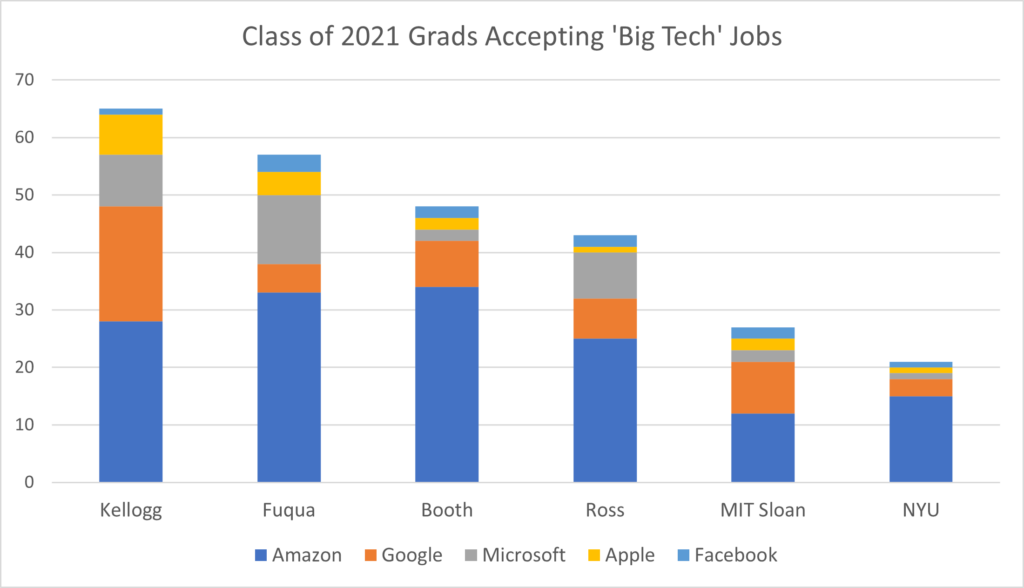 In summary, of the six MBA programs highlighted, Kellogg has a strong track record with a total of 65 ‘Big Tech’ job placements, followed by 57 for Fuqua, 48 for Booth, and 43 for Ross.

Now, Kellogg and Booth have larger class size than these other four MBA programs. To account for the differences in class size across the six MBA programs, we will now review the Big Tech jobs data by school as a percent of the total tech industry jobs accepted. 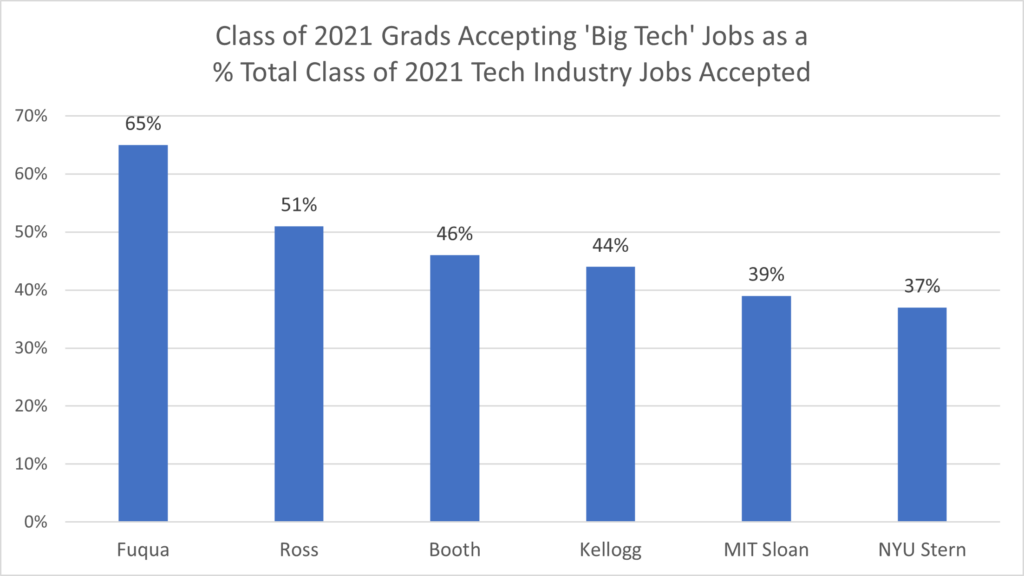 Of the Class of 2021 Fuqua graduates who accepted technology industry jobs, 65% accepted jobs at one of the five Big Tech firms (Amazon, Google, Microsoft, Apple and Facebook) vs. the comparable figures of 51% for Ross, 46% for Booth and 44% for Kellogg.

“In summary, Fuqua stands out for their high percentage (65%) of tech industry placements with Big Tech firms, and Kellogg stands out for sending a large number of graduates into the technology industry” stated Graham Richmond, Co-Founder of Clear Admit.  “Furthermore, U. Washington Foster is notable for the sheer percentage of their graduating class (45%) finding jobs in the technology sector, likely influenced by the school’s location in the hometown of major players such as Microsoft and Amazon.”

*In this article, we are using data from the Class of 2021 MBA Employment Reports. In the MBA Employment Reports, “Accepted Job” is defined as an MBA graduate who 1) is seeking employment 2) received at least one job offer and 3) accepted a job offer. As we showed in the ‘MBAs Seeking Employment’ Article, about 75% – 85% of MBA grads seek employment, receive an offer and accept a job offer. In addition, keep in mind that MBA students who already are sponsored by a firm and return to work at that same firm are not counted as part of this “Accepted Job” metric.

Eliot Ingram is Co-Founder and CEO of Clear Admit. He is a Wharton MBA with over 20 years of experience in the MBA admissions space. 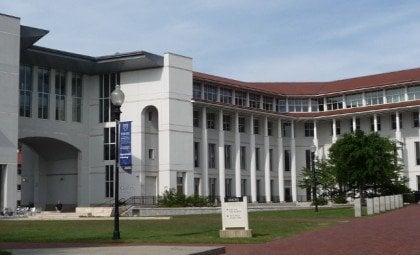 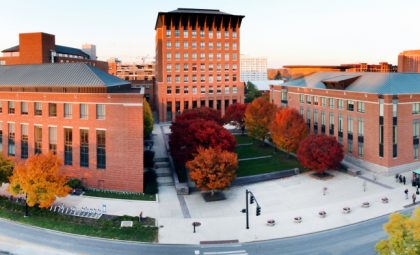 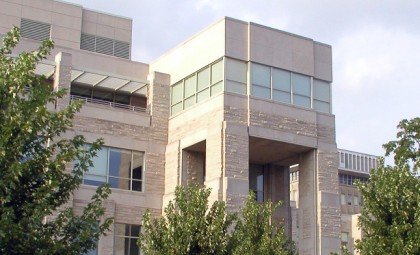 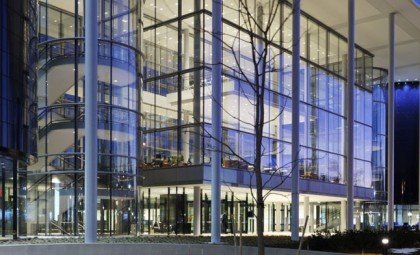 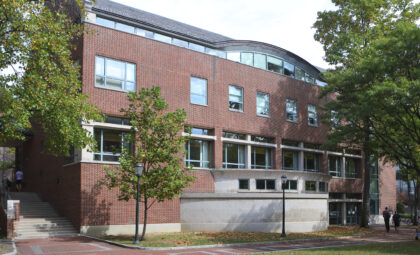 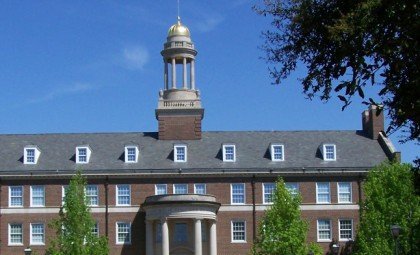 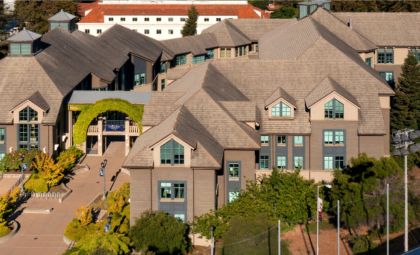 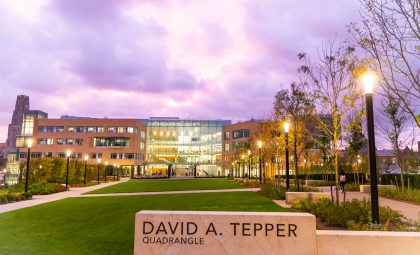 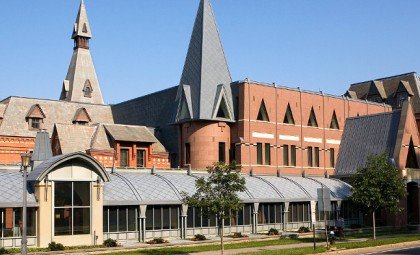 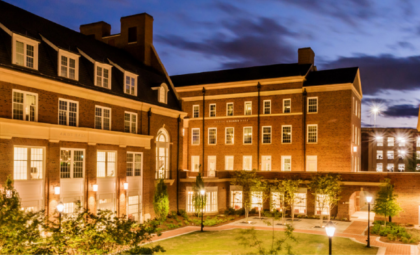